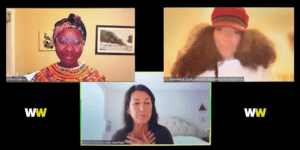 An annual tradition, The WOMEN’S WAY Book Prize was established in 2007 to honor the legacy of Ernesta Drinker Ballard, a WOMEN’S WAY founder, the first president of its Board of Directors, and an extraordinary champion for women and girls. Since then, WOMEN’S WAY has honored 13 incredible authors whose work has brought visibility to issues impacting gender and racial equity.

Each year, WOMEN’S WAY accepts nominations of a woman or gender-expansive author or co-author for their work in advancing the dialogue about issues impacting women and girls. A volunteer Book Prize committee then meets to narrow down the nominations, read the finalists, and choose the winner. This year, New York Times Best-Selling author Imbolo Mbue joined this distinguished list as the 14th Annual WOMEN’S WAY Book Prize honoree for her newest novel, How Beautiful We Were.

On October 20th 2022, WOMEN’S WAY held the 14th Annual Book Prize to honor Imbolo Mbue. This event brought the WOMEN’S WAY community together for a virtual conversation and Q&A session moderated by Jeannine A. Cook, author and shopkeeper of Harriett’s Bookshop. For those in attendance who had already read How Beautiful We Were, the evening brought new insight to Mbue’s newest novel and its complex characters. For those who hadn’t yet read the novel, the conversation nevertheless provided an intimate glimpse into Mbue’s writing process and major themes of leadership, power, resistance, and justice.

“It was so exciting to hear directly from Imbolo Mbue. Having volunteered as a Book Prize Committee member, we read quite a few nominations this summer – all of which were amazing reads – but ultimately decided on How Beautiful We Were because of the protagonist Thula and her journey and leadership throughout the novel. I think Mbue’s writing touches on and highlights so many important themes, including women at the forefront of social justice movements.” – Hannah R.

To read a full recap of the event, check out our blog post here.